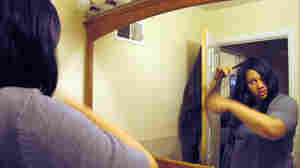 Annica Trotter prepares for a day at work at her new job as a receptionist. Tamara Keith/NPR hide caption

The Road Back To Work

The Thrill Of A Job, And The Worry Over Digging Out

March 31, 2011 • Annica Trotter's struggle to find work is over after five stressful months. But the financial woes aren't over for Trotter and her boyfriend. They still have to dig out from a mountain of bills before they can get married and do more to provide for their children.

The Thrill Of A Job, And The Worry Over Digging Out 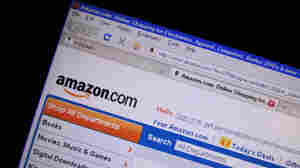 The range of products and services sold on Amazon.com are expanding quickly as part of CEO Jeff Bezos' vision for the Internet retailer. Karen Bleier/AFP/Getty Images hide caption

March 31, 2011 • When Amazon announced its cloud-based music service this week, becoming the first major company to offer a digital storage locker for music, it was the latest example of the online retail giant moving into products and services far beyond its roots.

March 31, 2011 • Google announced it will build its much-awaited fiber optic network in Kansas City, Kan. Cities across the United States vied for the selection, which should give Internet users lightning-fast speeds. Why Kansas and what's Google trying to say?

March 31, 2011 • David Sokol, viewed as the leading successor to Warren Buffett at Berkshire Hathaway, has resigned after buying shares in chemical company Lubrizol Corp. before recommending that Buffett acquire it.

March 31, 2011 • As the nation tries hard to recover from an economic crisis, a new report spells out how African-Americans can take part in that recovery. Entitled The State of Black America , the report is released annually by the National Urban League. The group's president and CEO, Marc Morial discusses their findings. 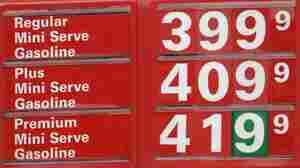 They're likely to push other prices up too: Tuesday's pump prices in Portland, Ore. Rick Bowmer/AP hide caption

Wal-Mart CEO Sees Inflation Ahead; Do You?

March 31, 2011 • "We're seeing cost increases starting to come through at a pretty rapid rate," Bill Simon tells USA Today. Some will be passed along to consumers, he says.

March 31, 2011 • Dozens of people have been killed in recent bus crashes. Three accidents this month spurred a Senate subcommittee to hold a hearing on the matter. The Transportation Department says about half of all motor coach fatalities in recent years have occurred as the result of rollovers, and about 70 percent of those killed in rollover accidents were ejected from the bus.

March 31, 2011 • The government's decision to bail out banks during the financial crisis turns out to have been a good one. Officials said banks have been paying back the loans and the government is now $6 billion in the black. Treasury Secretary Tim Geithner said taxpayers could eventually net more than $20 billion.

March 31, 2011 • David Wessel, economic editor of The Wall Street Journal, talks to Renee Montagne about the U.S. economy, and possible threats to a recovery because of slow growth overseas. Wessel says the single biggest risk to the U.S. economy right now is that oil prices continue to rise.

March 31, 2011 • David Sokol, a top executive at the company run by investor Warren Buffet, resigned Wednesday. Sokol was seen as a likely successor to Buffett, who is 80 years old. Sokol quit amid revelations that he had made some questionable personal stock trades involving a chemical company that Berkshire recently agreed to buy. 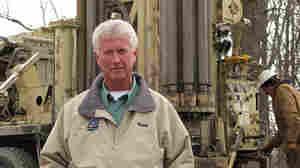 Mike Barlow has been installing geothermal systems for 20 years. But he says a 30 percent federal tax credit is increasing the popularity of the systems for families with modest houses. Elizabeth Shogren/NPR hide caption 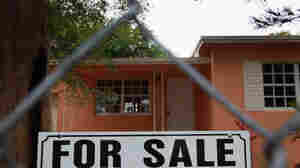 What's Next: Life After Fannie And Freddie

March 30, 2011 • There's widespread agreement that Fannie Mae and Freddie Mac should be abolished. But what will the mortgage market look like when they're gone?

What's Next: Life After Fannie And Freddie

March 30, 2011 • President Obama was on the offensive and defensive in his Georgetown University energy speech. He vowed to sharply reduce oil imports. 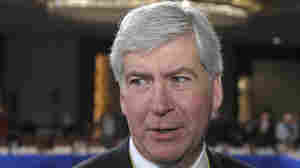 Michigan Gov. Rick Snyder signed a bill that will cut the amount of time a worker can get unemployment. Cliff Owen/AP hide caption

March 30, 2011 • The Labor Department on Friday releases the jobless rate for March. Economists believe roughly 160,000 jobs were added, a pace far too slow to absorb the nearly 14 million Americans looking for work. States are struggling to pay for unemployment benefits, and this week Michigan became the first state to reduce the amount of time people stay on unemployment.

March 30, 2011 • The March 11th earthquake in Japan destroyed countless businesses and left many others closed. Some suffered earthquake damage. Others were flooded by the tsunami. And some near the crippled Fukushima nuclear complex can't get supplies. But despite the challenges facing small businesses in the area, many owners are trying to reopen.